Paintings by the artists of Parovoz at the Karelore: Spirits of Fire exhibition

On June 10, the exhibition «Karelore: Spirits of Fire» was opened at the International Center for Cultural Exchange «Kalevala» of the Juminkeko Foundation (Finland, Kuhmo). The exhibition lasts until September 30, 2022. It includes some works by the artists of our studio, who are Andrey Kokorev, Sasha Luka and Anna Ridzanich.

Karelore is an animation project by Catherine Lebedev, based on the Karelian-Finnish epic poetry «Kalevala» and other myths of the Finno-Ugric peoples. Artists from different countries got united in the project behind common ideas and values. The exhibition «Karelore: Spirits of Fire» presents the paintings of the project participants to the audience.

Exhibition curator, artist and animation director Catherine Lebedev: «When you live in the world in which there is no myth, it is difficult to understand how the universe was comprehended in the past. It may seem that a star is just a luminous rock, a river is a stream of particles, and a forest is a pile of branches. But there is no greater power than a man and his choice. When the system changes, the old world becomes important, symbolic and dangerous.»

«I really love everything that is linked to folklore. Therefore, no sooner had I learned about the opportunity to participate in the exhibition based on Karelian-Finnish myths, I came forward.

For my work, I chose an episode from Kalevala, in which mistress Louhi steals fire and all the stars from people. The supreme god Ukko creates another fire and gives it to the heavenly girl for safekeeping, but she accidentally drops it into the lake, where a fish swallows it, and then another fish swallows the previous one, which becomes swallowed by one more fish.

I imagined this triple fish with the fire inside at once, and I really wanted to draw it. Initially, I was going to make just one painting, but in the end I illustrated the whole story, and so it turned out to be a triptych.» 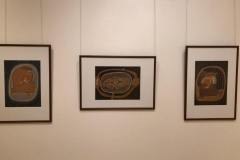 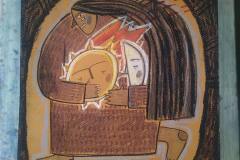 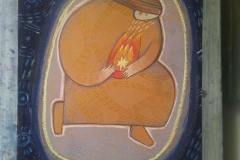 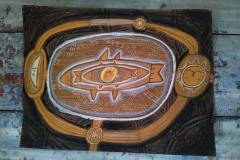 «I’ve been interested in Kalevala a lot since childhood … It happened as soon as I could read it. To my mind I have always sensed its ancient sacred meaning. My pictures are a declaration of love for the poetry, admiration for the beauty and depth of its images. I managed to make this confession as well as I could. Neither I want nor I can stop my research». 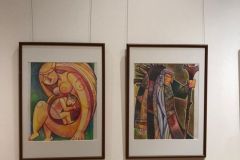 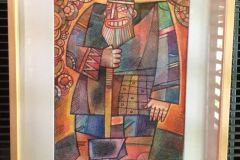 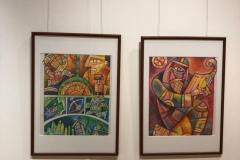 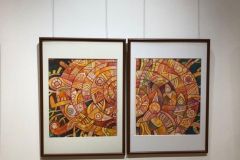 He is one of three main gods of Karelian-Finnish mythology. Ilmarinen is the god of air and weather, as well as the character of the Karelian-Finnish epos «Kalevala». He created fire in the Heaven along with brother Väinemöinen, a spark of the fire fell onto the Earth, so people started to use it. In the legends, Ilmarinen is called a blacksmith and acknowledged as the first one who forged tools from iron.

In Finnish and Karelian mythology, she is the goddess who participated in the creation of the world. In Kalevala Ilmatar is called the daughter of air and she also has the name Luonnotar («elemental»). The goddess is Väinemöinen’s mother.

In the Karelian folk epos and the Finnish poem Kalevala Louhi is a powerful witch and mistress of Pohjola, that is a harsh, far away country. On her initiative, Ilmarinen creates the magic Sampo machine, and then he becomes the husband of one of Louhi’s daughters. On losing Sampo machine, stolen by Väinämöinen, Louhi sends diseases to the country Kalevala. It is she who steals the Sun and the Moon.

Sampo is a magic machine in Kalevala. The machine is a source of happiness, prosperity and wealth.

The robbery of Sampo from Pohjola is the central plot of Kalevala: Väinämöinen goes to Pohjola along with Ilmarinen and Lemminkäinen. He lulls the inhabitants of the land by playing the kantele and steals Sampo from under a stone rock. Väinämöinen takes Sampo away on a boat, but the awoken mistress of Pohjola catches the thieves; during the fight Sampo gets crashed and the remnants of it sink into the sea. Some of them are driven ashore and they affect the harvest.

Väinämöinen is the main character in the Karelian-Finnish epic poetry Kalevala. He is the first man, a spellcaster, goddess Ilmatar’s son. He performs cantos, playing the kantele.

«It was such a pleasure to take part in the exhibition, I am very keen on folklore and fairy tales. I wanted to find myself in a fantasy world one more time and portray something wonderful and beautiful».

«The Legend of the White Deer»

Long ago, a son was born to the leader of a tribe. In honor of the birth, a white deer was presented to the baby. The boy and the deer became close friends. Years passed and the boy turned into an adult. One day he met a beautiful girl who became his wife. But they were misfortunate as they did not have children. That is why the leader’s son went to a witch, hoping she could solve the problem. The witch agreed to help, but in return she asked the most valuable thing the man had, that was the white deer. The man agreed. And then the ceremony began. The husband and wife had to spend the whole night next to the magic stone on the hill and then they would have a baby. Since then, the legend appeared, according to which if a couple spends the night near that stone on the hill and sees that very white deer, then they will have a baby.

Juminkeko is the International Center for Cultural Exchange «Kalevala», managed by the Juminkeko Foundation, which supports and promotes cultural heritage linked to the Karelian-Finnish poetry «Kalevala».

What are you looking for?